Sometime during the summer, I attended an orchestral concert, ‘The Best Is Yet To Come: Sinatra and Beyond’ at the Francis Winspear center for Music. Let me tell you, I felt so grown and sophisticated, but more importantly, it was such a great experience.

There was a huge catalog of work that he had that I was not aware of, but after my ‘Night at the Opera’ experience, I am a bit more knowledgeable about his music. Huge shout out to the great Edmonton Symphony Orchestra and conductor, Steven Reineke. Also, props to the awesome special guest singers; Montego Glover and Tony DeSare who gave Sinatra a fitting tribute.

Here are a few of the performances that I enjoyed;

In the performance of ‘I’ve Got You Under My Skin’ I sensed some Christmas vibes, almost like the soft jingling soundtrack that plays in stores around the Christmas season to create a warm and cozy atmosphere (also, to get you to spend all your money!). In particular, I enjoyed the section where there seemed to be a musical battle of sorts between the alto and tenor saxophones. It was interesting to watch the back and forth between both instruments.

The first guest artist to come out onto the stage was Montego Glover. She made her Broadway debut in The Color Purple’s original Broadway production and she is also a Tony award nominee for Lead Actress in a Musical. She looked inch the Broadway star with her short pixie cut and various arrays of elegant evening gowns. The tone of her voice which had a dark and sultry tinge was able to perfectly match the soulful vibe of the music.

The second guest artist to come on stage was, Tony DeSare. He is a singer/pianist/composer and is able to create fresh takes on old school classics.

The duet between Glover and DeSare showcases the clear contrast between their voices and was quite special. The light, airy nature of DeSare’s male voice versus the deep richness in Glover’s voice was made quite apparent in their performance of ‘Something’s Gotta Give’. 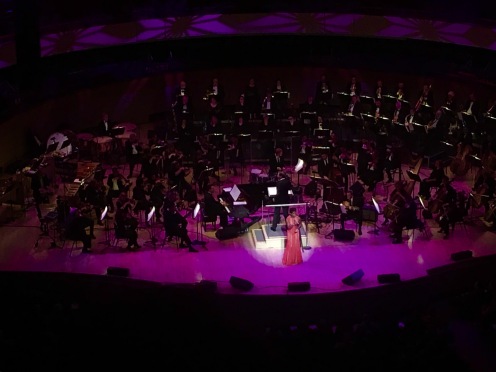 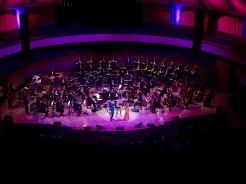 There was also a great use of lighting in collaboration with the musical instruments to promote an atmosphere of ‘pomp and circumstance.’ For example, the peach/pinkish hue of light matched the sultry tone of the saxophone.

Although, I was somehow distantly familiar with some of the tunes, I was very happy to say I recognized one clearly. This was the ‘Something Stupid’ song. I had no idea it was originally sung by Sinatra, I was only familiar with the Robbie Williams and Nicole Kidman version. If you haven’t yet you should definitely check out that version, I love their inclusion of the Spanish guitar to add some spice alongside the main band.

If I could sum up the general emotion from the whole night, strangely I would say it reminded me so much of Christmas. Which is why I am sharing my experience now in December. (Lol). But, also as I was quite unaware of how varied Sinatra’s repertoire of work was until now. As the year ends, I am reminded of Proverbs 22:28 (NIV)

“Do you see someone skilled in their work? They will serve before kings; they will not serve before officials of low rank.”

Can you imagine, it’s been almost 20 years since Sinatra died, yet his body of work is still celebrated today and held at such a high esteem. I hope this inspires us all to continue to be diligent in whatever we find ourselves doing even as we plan to go into the new year.

Overall, it was a great experience and I really hope to be able to attend more musicals/operas/concerts in the near future.

Let me know if you have any experience attending operas or your favorite memory from a concert you’ve attended?

A young woman on a mission to discovering purpose, to inspire growth and contribute to the Kingdom mandate. On the blog we are all about learning and growing and this is done through writing on topics from Faith, Education, Music, Food, Travel and so much more... (Romans 12:2) View more posts